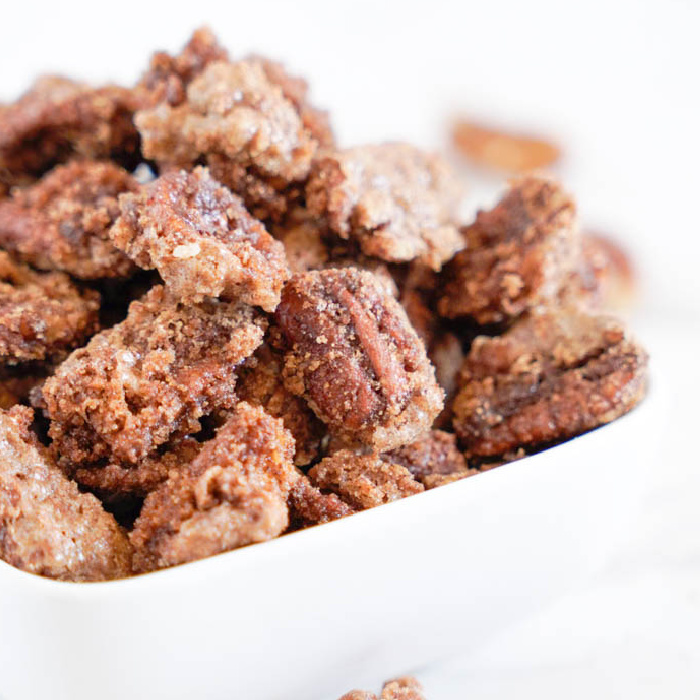 I am excited to share this Cinnamon Sugar Pecans Recipe with you for delicious Holiday Nuts you can make and share with your friends and family! 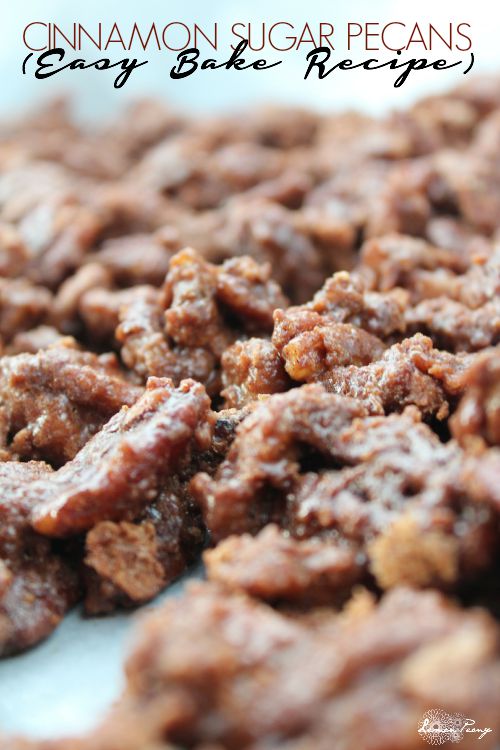 If you love pecan recipes, here are some of my favorites!

Plus, here are even more Holiday Recipes for Thanksgiving and Christmas! 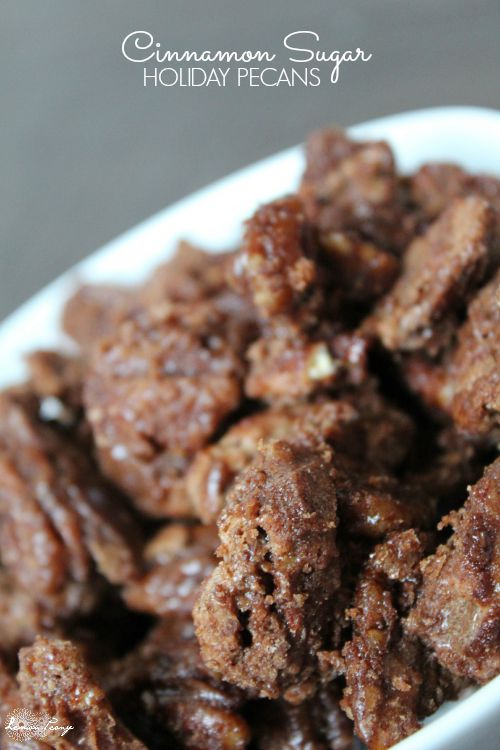 I decided to make these Candy Nuts the other day for my family, but I was on a limited time schedule. I decided to use the oven instead of the crock pot so that it wouldn’t take as long and we could enjoy them sooner! I hope you can enjoy this recipe with your friends and family this year! 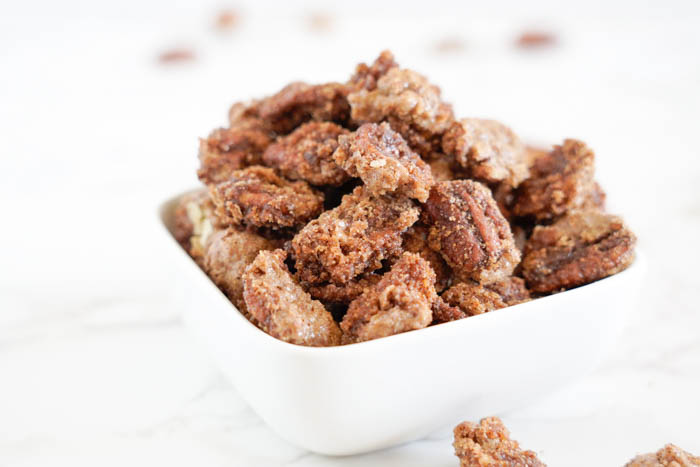 What you need for Cinnamon Sugar Pecans 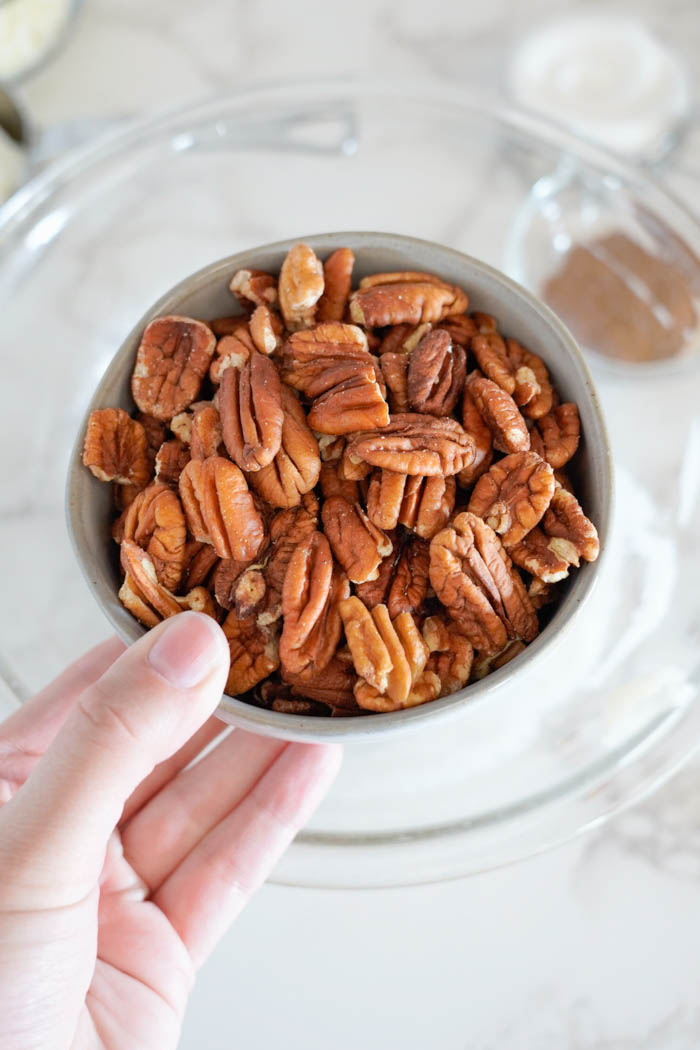 How to make Cinnamon Sugar Pecans

Preheat oven to 300 degrees and line a baking sheet with foil and spray with cooking spray. 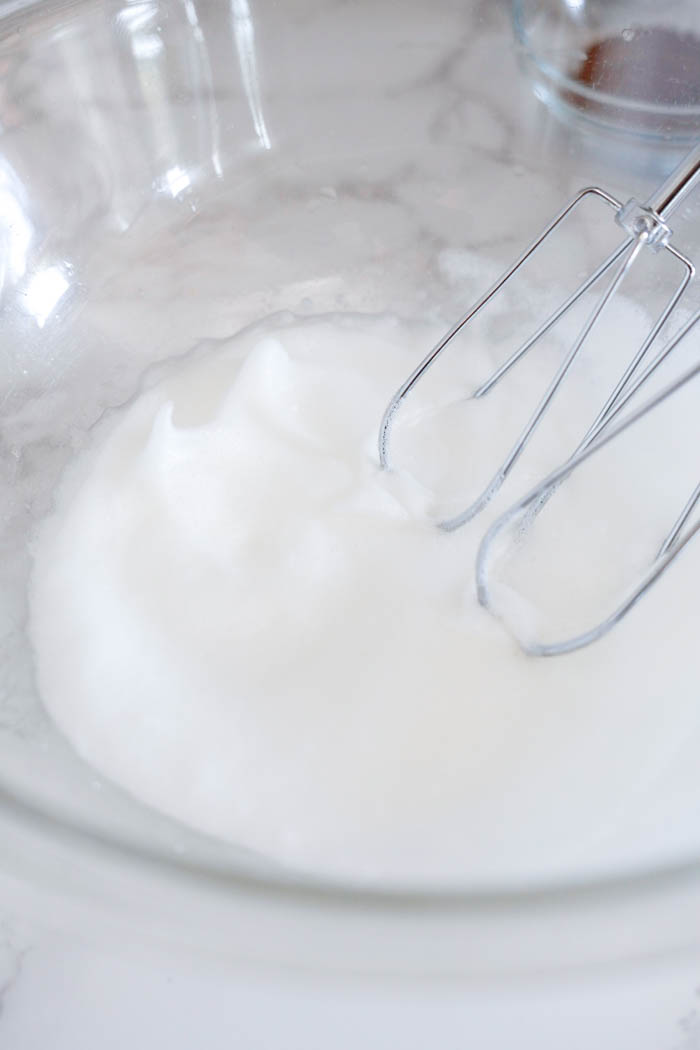 In a medium sized bowl, beat egg whites and water until a stiff peaks foam. 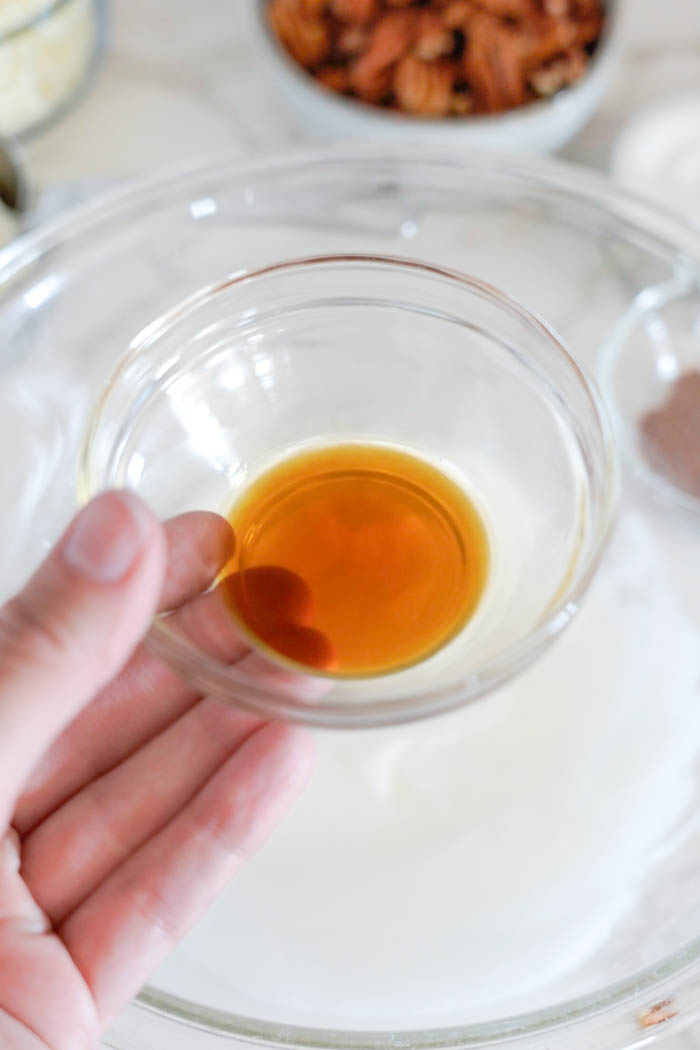 Add water and vanilla to the beaten eggs and mix. 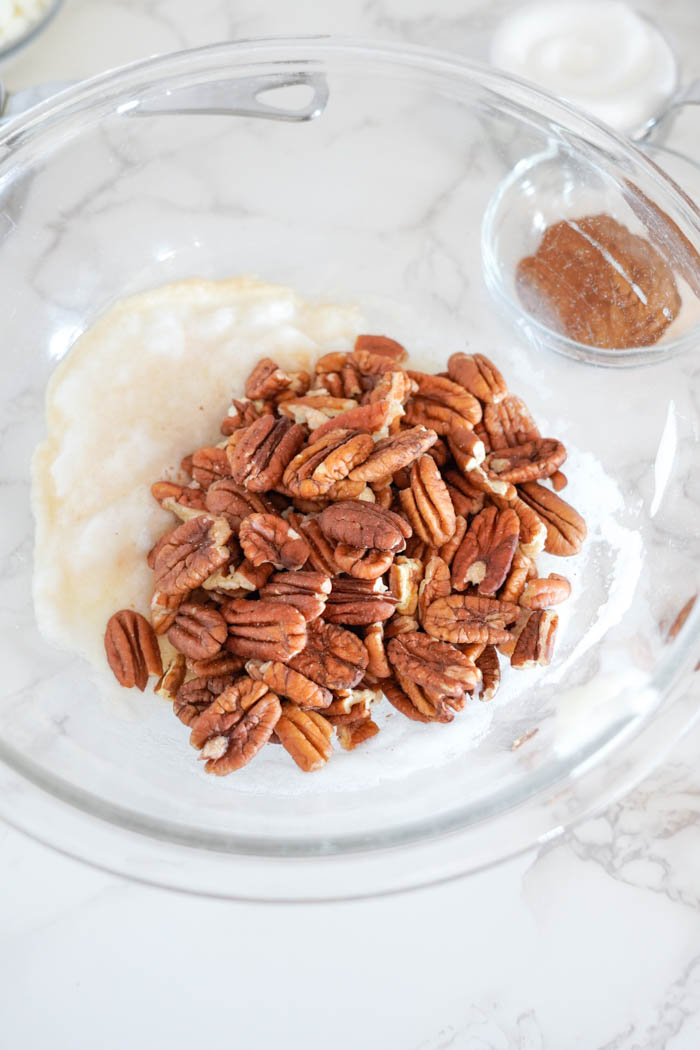 Toss pecans in the mixture until fully coated. 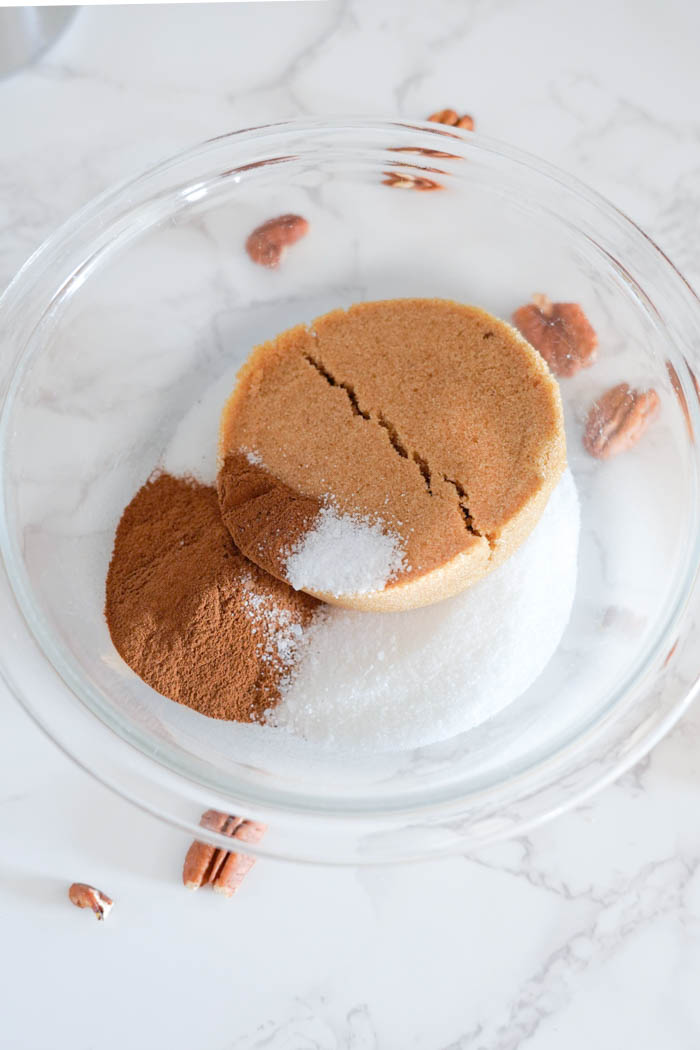 Finally, mix cinnamon, sugar (both kinds), and salt in a large bowl. 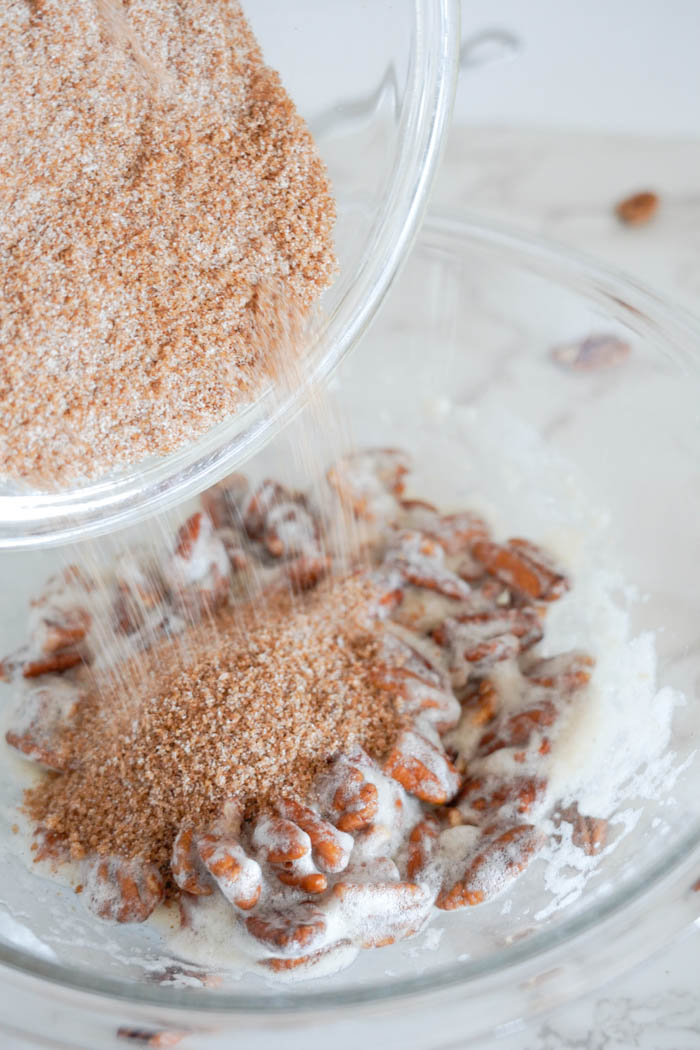 Slowly sprinkle cinnamon and sugar mixture over nuts until covered.

Pour candy pecans on aluminum foil and let cool for over an hour or until hard. If you double the batch, you may need to cook an additional 15 minutes. 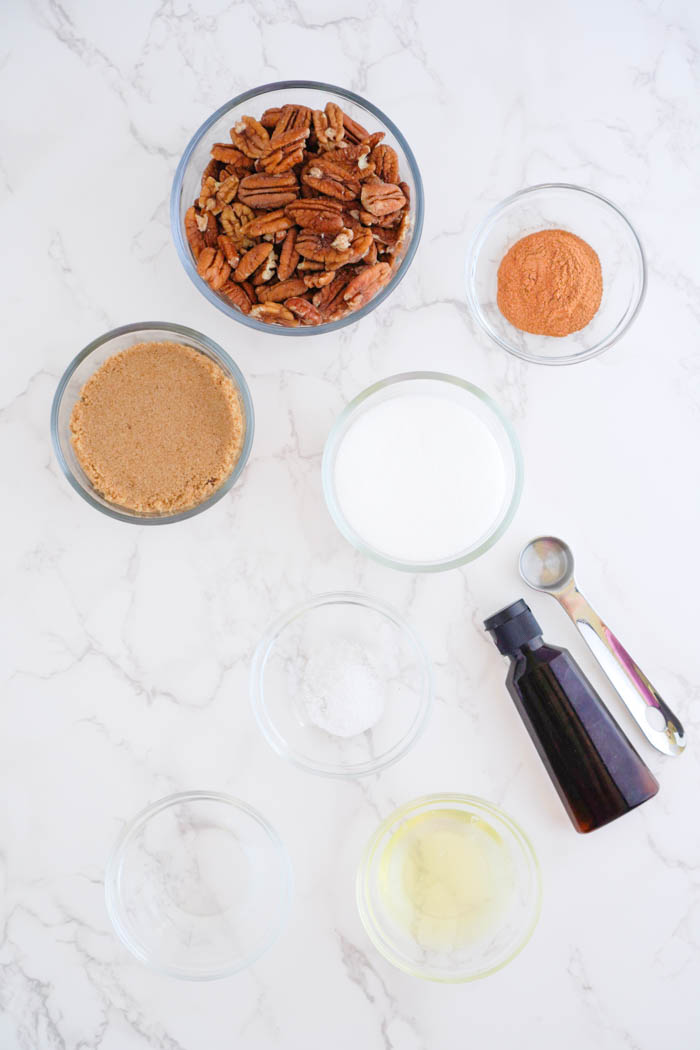 Directions for Cinnamon Sugar Pecans:
Preheat the oven to 300 degrees and line a baking sheet with foil and spray with cooking spray.
Use a hand mixer to beat egg white and water until a stiff peak forms.
Add vanilla and mix.
Toss the pecans into the mixture until they are well coated.
In a small bowl combine sugar, brown sugar, cinnamon, and salt.
Pour the sugar mixture over the pecans and mix well.
Transfer pecans to the prepared baking sheet.
Bake for 15 minutes and then stir.
Bake for another 12-15 minutes. Remove from the oven and place on aluminum foil to cool.

If you double the recipe, you may need to bake the pecans for an additional 10-15 minutes.

Did you make this recipe?

Share it with me! I'd love to see your creation!

How do you make cinnamon sugar pecans?

It’s really a lot easier than you think. To make Cinnamon Sugar Pecans the hardest part is beating the egg white enough. Otherwise you just mix everything together and put it inthe oven. You’ll need cinnamon, sugar, and brown sugar. Don’t forget the vanilla for extra flavor! 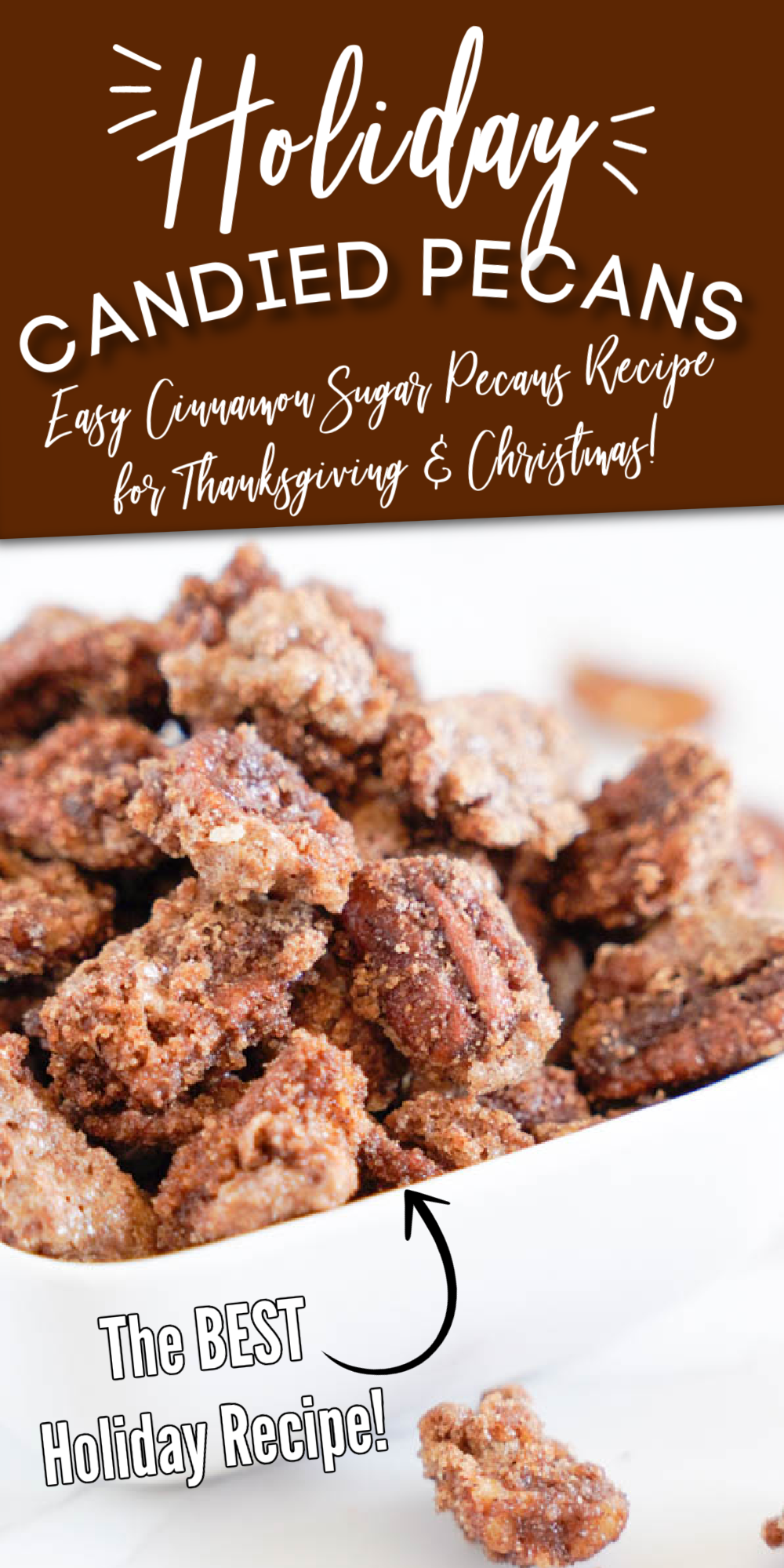 Are glazed and candied pecans the same thing?

They are similar, but you use different ingredients. Glazed pecans use corn syrup and butter. Candied pecans uses sugar and brown sugar!

Why are my candied pecans soggy?

If your cinnamon sugar candied pecans are soggy they probably have not baked long enough. Remove them from the oven and stir them really well. Place them back in the oven in 5 minutes increments until the liquid is evaporated.

Cinnamon Sugar Pecans or Candied Pecans will stay fresh in an airtight container for one week at room temperature or in the refrigerator for about 3 weeks.

This is one of my favorite recipes to make for friends and family for Thanksgiving and Christmas! You can package them up or take them in a fun serving dish to a party! 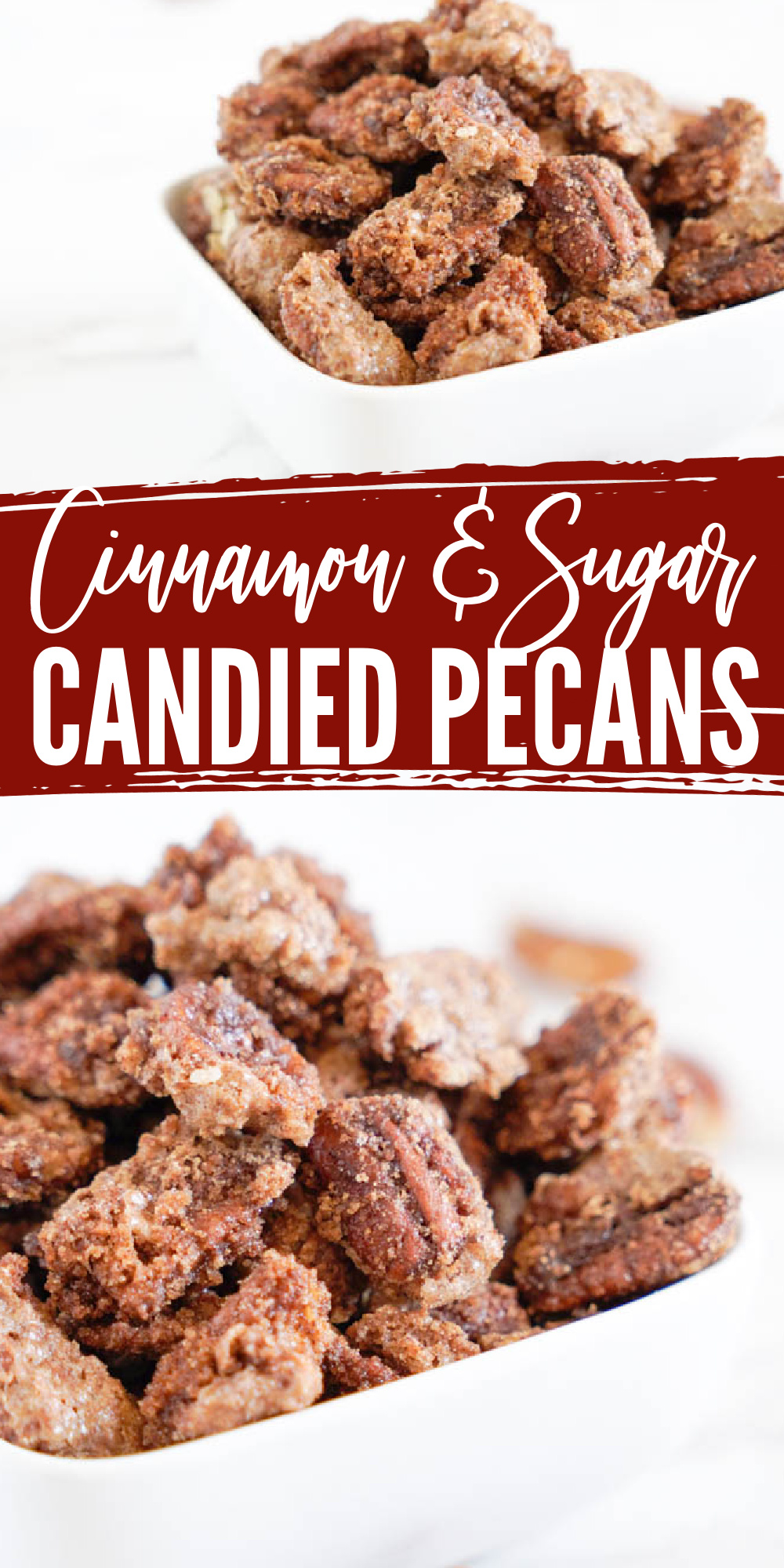 If you love this recipe, be sure to try this Pecan Pie Bars Recipe! It’s another pecan favorite and SO EASY for the holidays!


Pricing subject to Change at any time. Please make sure you check the current price on Amazon.com before purchasing. As an Amazon Associate I earn from qualifying purchases. Click here to view my entire Disclosure Policy. 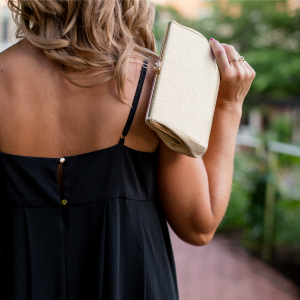